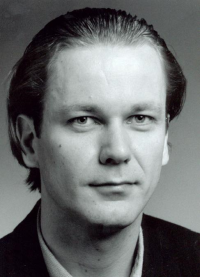 (1966-)
Associations:
Iceland Composer Society
Ulfar Ingi Haraldsson began his studies of music in his native country, Iceland in
the early 80's. Initially focusing on contrabass performance and jazz studies in the
jazz program of F.I.H. School of Music. Later enrolling in the composition and theory
program at the Reykjavik College of Music where he completed his B.A. degree in
1990. His teachers in Iceland included Karolina Eiriksdottir, Snorri Sigfus Birgisson
and Thorkel Sigurbjornsson.
Continued graduate studies in musical composition and theory from 1992-
1999 at the music department of University of California, San Diego. His principal
teachers were Brian Ferneyhough, Rand Steiger, and Bertram Turetzky but also did
studies with George Lewis, Roger Reynolds, Joji Yuasa and Harvey Sollberger.
Completing his Ph.D degree in 2000, the title of his dissertation was "Developing
Methodological Strategies for the Documentation and Treatment of Multi-Structural
Elements in Modern Musical Composition as relating to DUAL CLOSURE, an
Original Composition for Clarinet and Chamber Ensemble".

Ulfar Ingi Haraldsson is a member of the Icelandic Composers Association and has
worked as a composer, contrabassist, teacher and conductor first in Iceland and
later in California, USA. He has written works for orchestra, chamber groups, and
soloists which have been performed in Scandinavia, United States, Mexico and
Italy. His works have been performed by the Icelandic Symphony Orchestra, Caput
Ensemble, UCSD Wind Quintet, percussionist Steven Schick and the Bertram and
Nancy Turetzky Duo. Ulfar has appeared as a performer and composer at
international festivals including several Young Nordic Music Festivals in
Scandinavia, International University Music Festival , Darmstadt Revisited Festival
in San Diego, Reykjavik Art Festival and events relating to "European Cities of
Culture 2000".

for Kolbeinn Bjarnason on his 50th Birthday