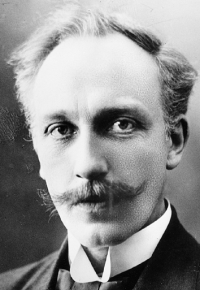 (1877-1939)
Associations:
Iceland Composer Society
Sigfus Einarsson was born in Eyrarbakki, Iceland and was inclined to music from an early age. He graduated from the Reykjavik College in 1898 and sailed to Copenhagen, intending to study law but as it turned out his main subjects were musicology and singing. His main teacher was the Danish composer August Enna While in Cophenhagen, Einarsson founded an Icelandic students´ choir and became its main conductor, writing songs for this choir as well as arranging folk songs.
In 1906 Einarsson returned to Iceland and immediately started teaching singing at two Reykjavik colleges. In 1913 he was appointed the church organist of the Reykjavik Cathedral, a post he attended for the rest of his life. Besides teaching and playing the Cathedral organ, Einarsson was an eminent chorister and a conductor; he conducted the Reykjavik Orchestra for a while, which was the first Icelandic orchestra (founded in 1921). Einarsson wrote books, articles, reviews, and textbooks on music and singing and edited a huge collection of Icelandic songs, called Islenskt songvasafn, published in 1915-16. It contained 300 songs and greatly incited interest in singing amongst the Icelandic nation.
Einarsson wrote dozens of songs for soloists and/or choirs, many of which have gained great popularity and have been widely performed. Songs for solo voices such as Draumalandid (The Dream World), Gigjan (The Violin), Augun blau (The Blue Eyes) and Sofnar Loa (A Plover Falls Asleep) and popular songs for choirs such as Thu alfu vorrar yngsta land (The Youngest Country of our Continent) and Sefur sol i aegi (The Sun Rests in the Sea). Besides Einarsson wrote three cantatas, several pieces for violin and piano, music for the theatre and music for his instrument, the organ.
Einarsson is now commemorated as one of the pioneers of Icelandic musical life.