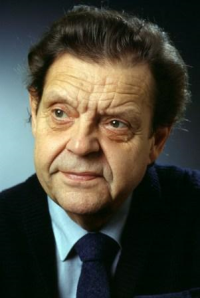 Jon Nordal was born in 1926. He studied piano and composition at the Reykjavik College of Music with Arni Kristjansson, Jon Thorarinsson and Victor Urbancic. He pursued further studies in Zürich with Walter Frey and Willy Burkhard in 1949-1951. Later came years of study in Copenhagen, Paris and Rome before he attended the summer course in Darmstadt in 1957. Nordal had thus come far in his musical training in 1956, when he received a commission for a work to mark the visit of the King of Denmark, Frederik IX, to Iceland. The young composer responded with Sinfonietta Seriosa, with the Icelandic title Bjarkamal, an early example of Icelandic symphonic music coloured by Hindemith and Bartók.

Jon Nordal has made an important contribution to Icelandic musical life as a composer, pianist, teacher and as director of the Reykjavik College of Music from 1957 to 1992. He was one of the founders of Musica Nova, a forum for the performance of contemporary music, and as such has helped to introduce contemporary musical currents to younger generations.

Jon Nordal has received many awards during his long career in music. He receives an artist´s bursary granted by the Icelandic Parliament, and is Commander of the Icelandic Order of the Falcon. In 1992 he was the first recipient of the “Tonvakinn” music prize, awarded annually by the Iceland National Broadcasting Service (RUV), granted to Nordal for his years of service to Icelandic music culture. Nordal received the Danish Order of the Dannebrog in 1956, and was elected member of the Royal Swedish Academy of Music in 1968. In 1999, Nordal was nominated for the Nordic Council´s Music Prize 2000 for his string quartet Fra draumi til draums (CD: Mal og menning MM009). Other recordings include Portrait (CD: Iceland Music Information Centre ITM 7-04), featuring four orchestral works conducted by Paul Zukofsky and Sol eg sa (CD: Iceland Music Information Centre ITM 7-09) with Nordal´s religious choral works.

Concerto for Piano and Orchestra