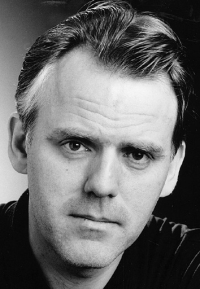 (1957-)
Website:
http://www.stefanstef...son.net/
Associations:
Iceland Composer Society
Born in Hafnarfjörður near the capitol of Iceland, Reykjavík in 1957 Stefan started playing music at an early age. At first he banged on the drums with a fierce interest in latin music as well as jazz. As a teenager he started studies at Sigursveins Music School in Iceland on flute.

About 17 he started playing the saxophone and has done that since. After various musical studies, amongst them studies with the legendary icelandic tenor saxophonist Gunnar Ormslev, Stefan started writing music. His first albums werer released with a band called Ljósin í bænum (City lights) a group of friends that Stefan got together to play his music. All in all Ljósin í bænum made two albums. The second one called Disco Frisco (a parody of the Disco era) became extremely popular as a funky disco single. The band was dissolved in 1979. After Ljósin í bænum Stefan did a stint with the very popular band Tivoli, wich released the very popular song (still today) Fallinn by Stefán.

In 1980 Stefan went to Berklee College Of Music USA, to study jazz music. After graduating from Berklee in 1983 Stefan worked as a professional musican full time in Reykjavík, playing, composing, arranging, teaching and raising a family. One boy and two girls.

A spectrum of Stefans work can be seen in the menus on this site. All the major compositions, major bands he worked with and all the major projects. In these pages you will find playable recordings, lyrics, comments and anything that might be of interest.

Today Stefan is working with the Reykjavík Big Band, headmaster of Arbaer Music School and playing with his jazz/folk band Vikivaki that plays jazz influenced by icelandic folk songs.

Stefan was selected composer of the year in jazz&blues category at the Icelandic Music Awards in 2015.

His latest album: An Icelander at Alhambra Palace was voted the album of the year in the same category.