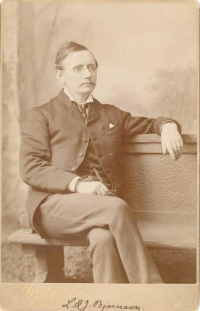 (1847-1927)
Associations:
Iceland Composer Society
The composer and pianist Sveinbjorn Sveinbjornsson was the first Icelander to study composition and the first Icelander who earned his living from music. He is best known for the Icelandic national anthem, O Gud vors lands, but he also wrote a lot of songs for solo voices or choirs, songs that have strong connection with the lyrical style of Mendelsohn. Besides he worked as a piano teacher and a pianist throughout his career.

Sveinbjornsson studied music in Edinburgh, Copenhagen and in the renowned conservatory of Leipzig where his main teacher was the German composer Carl Reinecke (1824-1910). There were few opportunities in Iceland back in the late 19th century for educated musicians and hence Sveinbjornsson spent most of his life in Edinburgh where he worked as a piano teacher and a composer. He was successful in Edinburgh, had a lot of students and had his works published, either in Edinburgh or London. In 1922 Sveinbjornsson moved back to Iceland after the Parliament had decided to pay a tribute to him by granting him annual subsidy. Sveinbjornsson immediately became an active member of the Icelandic musical scene and amongst other things participated in the first chamber music recital in Reykjavik where his piano trio in e-minor was performed. He went to Copenhagen in 1925 to get cure for his ailment but he had become very sick at the time and he died in February, 1927, 80 years old.

Songs form the bulk of Sveinbjornsson´s output but he wrote eighty songs, out of which only fourteen were based on Icelandic texts and the rest was composed to English lyrics. He also arranged Icelandic folk songs but since he was moulded in the major/minor tradition he often changed the ancient modes of the Icelandic songs so that they would fit in with the European major/minor tradition.

Sveinbjornsson wrote several pieces for chamber groups, amongst them two piano trios and a violin sonata and he also composed for his instrument, the piano. He was not an avant-garde composer and his music was strongly influenced by Mendelsohn and early German romanticism. However, he was a pioneer in the Icelandic musical scene and is now commemorated as the first Icelandic composer.